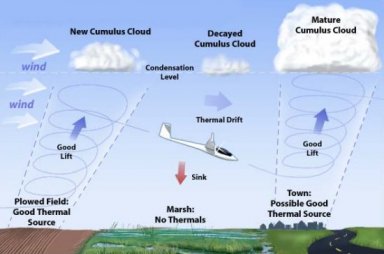 Thermals should not be confused with ridge lift. We want sim thermals to have appropriate strength, have a life-cycle, have cumulus clouds, relate to ground features.

Thermals are relatively simple, but often badly explained. The Sun heats the ground, some areas warm better then others (e.g. those areas are less damp, or facing into the sun more), the warmer air tends to collect near the surface and then rise in a steady column. The air cools steadily as it rises (because it is EXPANDING due to lower pressure, not because it's otherwise losing heat, so this is easily predictable). Give the prevailing HUMIDITY, at some altitude (i.e. temperature) the water contained in the air-mass will condense out and form a cloud. Given all this, Cumulus clouds would have perfectly flat bottoms (because that condensing temperature occurs at a particular height). In fact the center of the rising column of air is rising faster than than the air around it, and this is enough to push the center of the bottom of the Cumulus cloud UP a little, so the underside of active Cumulus clouds is typically concave. You can easily see this when thermalling under a cloud because as you reach cloud base the edges of the cloud will be lower than you are (which is slightly unsettling as you can't see the horizon).

MSFS essentially has no thermals, but the support for them seems to exist within the sim as modest lift can be detected in the proximity of thunderstorms. The Kinetic Assistant add-on for MSFS generates 'thermal lift' with a life-cycle that can be shared by multiple players but has no way of linking that lift to the MSFS simulated Cumulus clouds.

X-Plane has built-in thermals but not currently related to cumulus clouds.

Condor 2 is the only flight sim with thermals with a life-cycle, linked to Cumulus clouds, shareable in multi-player.